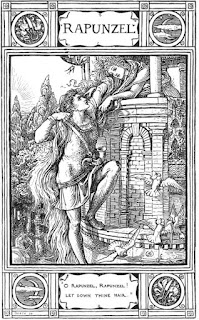 A man and woman wished for a child for a long time, but although they tried many times they could not conceive. Through a window in their house they could see a beautiful garden that belonged to a powerful enchantress that was feared by all the world. The woman longed to eat some rampion out of the garden so her husband snuck in and stole some in the night. The made a salad of it and ate. The next day she lusted for three times as much rampion. Again the husband went to the garden, but he came face to face with the enchantress. He pleaded with her that it was only for his wife. The enchantress's rage subsided and she let out a proposition. He could take as much rampion as he wished, but his wife's child would be given to the enchantress. The man agreed and they both departed. The woman had the child and the enchantress appeared to take her away. The child was named Rapunzel and she grew into the most beautiful woman ever. When Rapunzel was twelve she was locked away in a tower
Post a Comment
Read more A boy named jack became increasingly unhappy with his home life, so he ran away and sought to live a full life. He ran and ran until he bumped into an old woman gathering sticks. This old lady took him in as a servant and vowed to pay him well. He served her for twelve months and a day. She paid him with a donkey that spit up currency every once in awhile. He then rode to a inn where he ordered everything and slept. The inn keeper noticed the donkeys exquisite feature and swapped his regular donkey for the money donkey. Jack rode to his fathers house without notice that the donkey wasn't the same. He got home and wished to marry the daughter of a widow down the street. He asked his father for leave to do so but he said no because the son didn't have money to keep her. He then pulled on the donkey's ears for money but none came out. The father then beat the son out of the house with a hay fork. He then served a woodworker for twelve months and a day. He was paid with a magic
Post a Comment
Read more 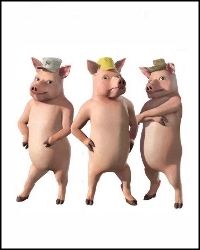 In a land where animals acted like humans, there were three pigs and a mother pig. The first pig ventured out and found a man with a large bushel of straw. The pig bartered for this straw then build a house with it. A big bad wolf came around and asked the pig to let him in. The pig said no so he huffed and he puffed and he blew his house down. Then wolf ate the pig. Second pig went out and he found a man with lots of Furze. so he bartered with the man, and build a house. The wolf again came down and asked to be let in. The pig said no so he blew his house down and ate him. The third pig came across the man with a load of bricks. He bartered with the man, and built a house out of bricks. The wolf once again came to the pigs house and asked to come in. The pig said no and the wolf tried but failed to blow the house down. So he tried to trick the pig into coming out. He said he knew that a farmer's field across the way had turnips and he would love to take pig there for a meal. They
Post a Comment
Read more 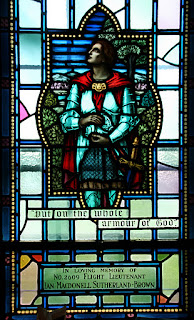 Lancelot was traveling through a forest where he conversed with many hermits. These hermits told him that Sir Galahad was his son, and that his son had set in the Perilous seat at the round table. This seat was told to kill anyone that was not the knight who would find the holy grail. When he exited the forest he came upon a great castle that had two opposing forces made up of knights. One side had white horses and white armor, while the other had black horses and black armor. The black knights were faring worse in the battle so Lancelot joined their side. He fought ferociously killing many white knights, but they kept coming eventually tiring him out. He became so tired that he could not lift his swinging arm, and his foes carried him away into the forest. He then came across a nun who told him that the battle was a sign. The black knights were symbolic of sinners, and the white knights were symbolic of angles. The nun told him such a fight was unwinnable so he should bare no shame.
Post a Comment
Read more 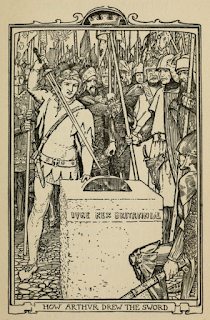 With no king in Britain, every knight hoped to seize the crown for himself. The nobles of the kingdom came together to elect a new king at the church in London. When they got their there was a great stone with a sword in the middle. The stone had an inscription on it that read " Whoso pulleth out this sword is by right of birth King of England". All the men around tried to pull the sword out of the stone but none could. They called the Archbishop said that none of these men are the rightful heir, and he didn't  know where to find the person either. Two knights were chosen  to stand guard over the stone. One of Arthur's   acquaintances  had left his sword at home so he went back to get it. Arthur could not get in to retrieve the sword so he rode away in anger towards the sword in the rock. Vowing that this person shall not go without a sword. He rode to the stone and pulled the stone out, he then gave it to Sir Kay. Sir Kay knew that this was not his sword. Arthur was
Post a Comment
Read more

Week 11 Story: The Moon Strikes Back 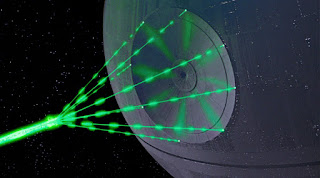 There once was a habitable planet called YX-99 many light years away from earth. It was filled with lush forest, and oceans full of aquatic life. John Doe and Married Doe had recently gotten a large inheritance from their parents who died in a space ship crash while doing illegal street racing. They wished to invest their money wisely so they bought YX-99 at a government auction. They planned to strip mine the entire planet for its resources so they could become industry tycoons. They got on a ship and headed there, sleeping in stasis for nearly ten years. When they arrived they started setting up their mining equipment. All was going well, and many months went by without a hitch. The moon, unknown to the newcomers that is was sentient, became angry at the pollution that now clouded its face as it looked down. The moon shot some laser beams blowing up some mining equipment. John became angry as well and vowed revenge on the moon. He gathered some spare tech laying around and created a
2 comments
Read more 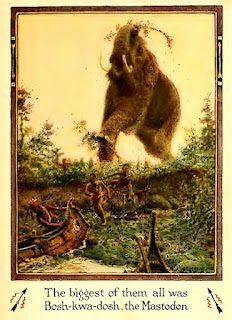 The earth was extremely cold and covered in snow. Iagoo had a teepee which was warm, and he had two young visitors with him, Morning Glory and Eagle Feather. A mouse crept in, but the boy was told not to harm him. Iagoo told the children about a time when beast outnumbered man, and greatest amoung them was Mastodon. Mastodon perished and there were only two people left on earth, a girl and her brother. Her brother was a dwarf so she gathered all the food for them both. She grew tired of this so she gave him a bow and arrow and told him to learn for himself. He practiced for a while and was finally able to kill a bird, and his sister sewed them together to make a coat. He layed down on a patch of ground lit by the sun. The sun shrunk and shriveled his new coat. He vowed to get revenge on the sun. His sister made a snare out of her hair for her brother. he then took this and with the power of transmutation he turned it into metal. he then placed the snare where the sun would rise, and ev
Post a Comment
Read more
More posts